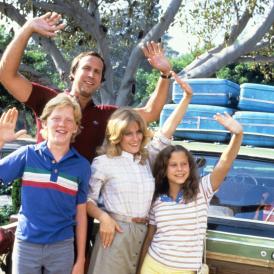 Happy 76th Birthday to Chevy Chase! Chevy was one of the original cast members of Saturday Night Live beginning in 1975. During this season, he introduced all but two shows with "Live from New York, It's Saturday Night Live!" Chevy also starred in many well-known movies like National Lampoons Vacation films, Caddyshack and Three Amigos.