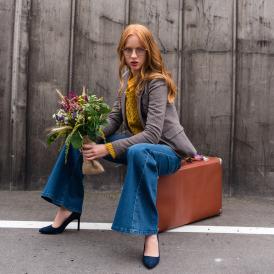 A Day for Dancing!

The week of April 9th, 1977 had ABBA's Dancing Queen #1 on the charts. Just 8 years earlier, Levi's introduced bell-bottoms on their favorite jeans in 1969 which were still in style until the end of the 70s. It seems that rends never completely leave and this one was no different. A modernized version of bell-bottoms resurfaced again in the late 90s with boot cut but was not quite as large as their predecessor in the 70s.